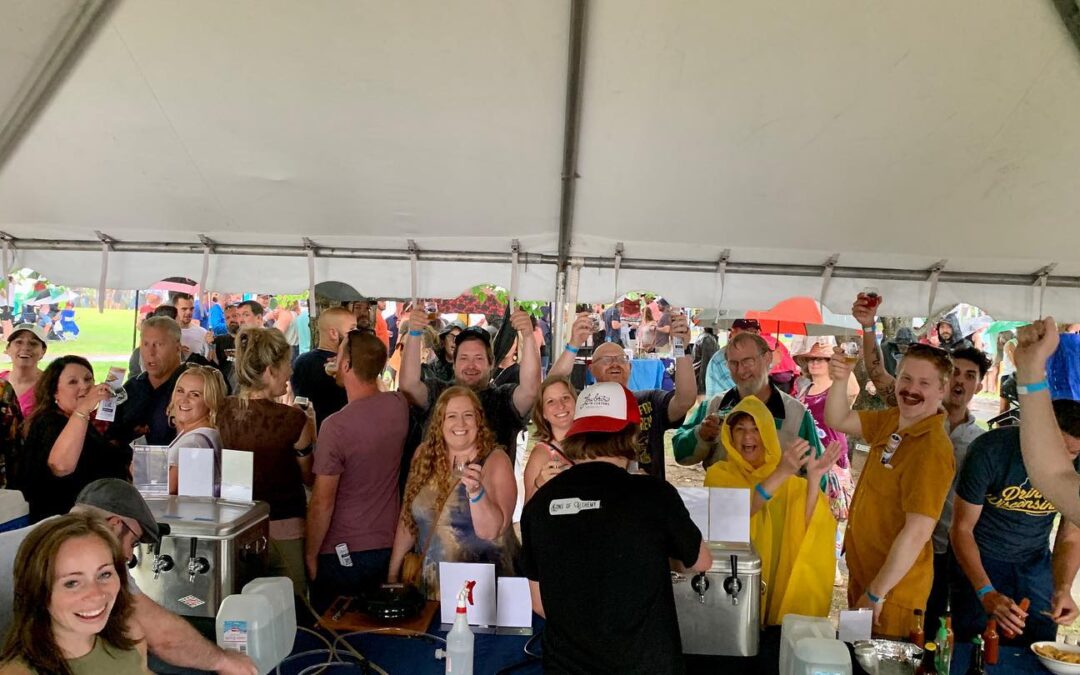 Once again, Sons of Alchemy had a blast participating at this year’s brewfest at Fort Hunter. Surprisingly it wasn’t a million degrees this year, but unsurprisingly there was a brief torrential downpour that didn’t rain on anyone’s parade… it just brought the party under our tent while we kept the beer pouring too!

This year, we had 11 total beers on tap and a wide variety of delicious fermented hot sauces courtesy of club member Mike Ross, who also contributed three of the eleven beers too! Two of them were Saisons. Buck the Blue featuring buckwheat and blue corn and a Funky Summer Sipper that was can-conditioned with Brettanomyces. The other was an Old School IPA, that lived up to its name with a solid hoppy backbone while being totally refreshing at the same time!

Founding club member and head brewer at Mount Gretna Craft Brewery, Brad Moyer brought his Solera of my Soul, a living blonde ale that has been maturing in a red wine cask for over five years!

We also had Justin Stevens back for this event, all the way from Pittsburgh. He brought a very well-received Fort Hunter Hazy IPA that got some sincere kudos from a longtime bartender and IPA aficionado at the event!

Our four newest members; Jesse and Alicia Stoner, Josh Yeckley, and Brian Wright made a huge splash with their offerings, which were a Lazy Golfer Pils, a Blondé Rosé (which also made a damn fine blend with the Lazy Golfer btw), and a Mango Smoothie that really wowed the crowd! Collectively, they brew together as Ramble On Brewing Co.

Justin Gestford of BeerFoodFun fame was kind enough to offer a keg of his oh-so-popular Scarlett Blossom kettle sour brewed with strawberry and hibiscus that looked just as amazing as it tasted!

All the Sons of Alchemy beers were very popular with the crowd and at the end of the day, we had kicked 7 of our 11 kegs and took home very little in the remaining kegs, Year after year, the Sons of Alchemy have come to this event and been one of the most popular tents at the event, and the folks at Dauphin County Parks & Rec are top-notch, always throwing an amazing shindig! We are immensely grateful to them, and cant’ wait to do it all again next year!

I also need to give a big shout-out to one of our own SoA club members, Brookes Hemauer, owner of Hemauer Brewing Co., who snagged 2nd place at the Brewfest! Congrats brother!

Until our next event…