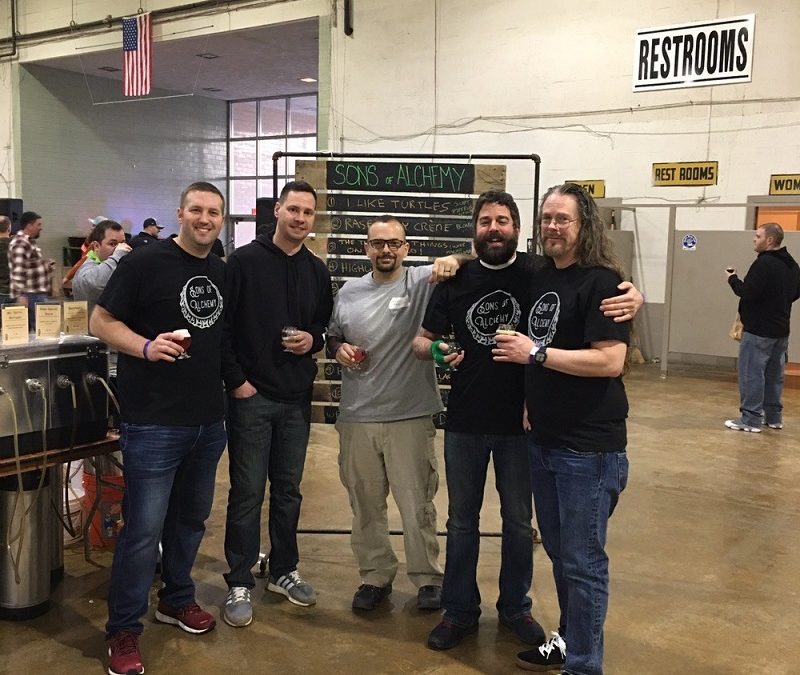 On Saturday, February 8th, 2020, The Sons of Alchemy poured our Home Brews (and Hot Sauce Samples) for the public at the Hibrewnation festival in York, PA. We had 10 beers on tap and four fermented hot sauces. One attendee stopped by our table and told us we had the longest beer lines at the festival, and that was with 3-4 Sons pouring at any given time!

Congratulations to Sons of Alchemy Secretary Steve Anderson, whose “Fruit Tart” Berliner Weisse won a trophy (of indeterminate place) in the pre-festival judged and scored homebrew competition. Steve’s beer scored a near perfect 39 out of 40. He also had the distinction of his two beers receiving both the highest and the lowest scores in the club.

The festival also included a Peoples’ Choice competition, where attendees received tokens to vote for their favorite beers/brewers. Sons of Alchemy VP Mick Spencer somehow ended up with the third most tokens in the event, for his “I Like Turtles” Imperial Sweet Stout.

Sons member Mike Ross designed creative ways to serve hot sauce samples and (mostly) manned the hot sauce table, with some help from Tres Valentino. They must have done it right: almost all the bottles were exchanged (not sold!) for donations to the club.

In the “getting our name out there category,” Sons President Shane Sansone sold the (club) shirt off his back to an attendee who asked for it. You can see the very fashionable remaining plain white tee in one of the pictures.

All in all, Hibrewnation was a great success for the Sons and lots of fun. Thanks to everyone for brewing, organizing, equipment toting and pouring. Thanks also to Mike Ross and Jeff Reed for many of the pictures accompanying this report.